My Home at the Intersection – a successful Experiment in Dramaturgy 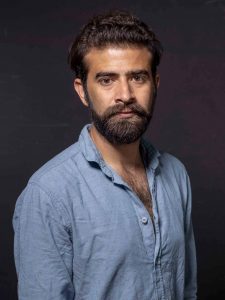 Abhishek Thapar (1985, Moga) is a theatre maker, performer, puppeteer and artist based in Amsterdam. He holds a post-graduate diploma in Physical Theatre from LISPA, London and a Master in Theatre degree from DAS Theatre, Amsterdam. Currently, he is building an artistic research and practice in post-colonial epistemologies, historiographic metafiction and storytelling. DSM writer Pranita Pandurangi caught up with him to chat about his experience of building his latest work, My Home at an intersection.

What was the experience and process like of working with a dramaturg?

I met my dramaturg, Maria, in Amsterdam. She’s also a writer and editor. Her role was very much was to look at the material from a distance – reflecting on it and looking at how it relates to the Western audience. She also became a critical eye and was helpful in looking at histories which are being represented and performed not in the place where they belong. She answered questions like how much of history does one need to know to reach the core of the work. She was also looking at creating logics within the work and what it means in the the larger context of globalization. She would have studio visits where I would show her part of the work. She would ask me informative questions. She would also describe how she experienced the work and ask probing questions about things which she could see but I couldn’t see. There were a lot of roles put on my shoulder as a solo performer so she helped me break them down and look at it from a strategic, organized way and also shape the timeline of the work. I was talking about a very specific time in the play. There was the question of what to share and what not to share as well as so much of theoretical referencing and conceptual ideas like – what this word or colour could mean, etc.

Could you take us through the step-by-step process?

She was there right from the start – within the work, there are various elements – one is storytelling and then there is film and there is 400 kgs of what seeds of the floor which becomes the landscape of Punjab. Then there is the lemon pickle which is 27 years old at the start of the performance shared with the audience. There was a lot of writing – film material of the reconstruction of the house so she helped me dig more into the references, and what the lemon pickle could mean (could also be the last memory of my grandfather) . We looked at the performativity of the lemon pickle, thinking more about food as a way to access memory. It was a difficult choice for the audience to consume it as it’s black in colour but it’s the natural aging process which makes it so. At some point I would refuse to let anyone enter if they did not eat the lemom pickle. But then those choices changed over the course of time though. We looked at how the pickle could be a motor that drives the entire one hour of the performance. From there to working on how the text which I had written could be boiled down to the questions which I wanted to address. She also helped me sharpen those questions. I was too caught up in my studio so she became an outsider/ collaborator / conversation partner who helped me draw those linkages and connections.

What was the experience like of working in Europe?

I had to learn a lot when I moved to Europe in terms of learning the language, understanding contemporary art, etc.

Going forward, would you use a dramaturg for other productions?

Maria and I work very closely so we’re working on two more productions.