‘I am a Chhara, Not a Criminal’: Budhan Theatre member Atish Indrekar on using theatre for social justice

Editor’s Note: India has a rich history in theatre, but our knowledge about the work our contemporaries and older groups have and are doing, is often limited to urban centres or the geographies we live in. Driven by a curiosity to know about the work being created across the country, over the next couple of months, we will publish interviews and stories with different theatre groups and personalities from around the country.

As India celebrates 75 years of its independence, this time around, we see the national flag frivolously waved from streets to profiles on the internet. Maybe it’s a good time for us to think about what it is that we really call our freedom? Who is this freedom for? What is this freedom from? And if only some of us can truly feel free in the nation today, are we all really free?

The story of Budhan Theatre in Gujarat is a fascinating example of using theatre as a medium for social justice and community development. Their work and their journey takes you far beyond the precarious and often insipid realities of urban theatre in metropolitan cities. Their questions and their challenges seem urgent and very real. A friend, while speaking about the group said to me, ‘’when Gayatri Spivak asks, ‘can the subaltern speak?’ this (Budhan) is the subaltern speaking”. For over two decades, Budhan Theatre has effectively used theatre for documenting history, building community and seeking recognition from mainstream society. 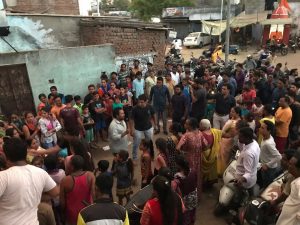 Budhan Theatre was founded in 1998 by Dr. Ganesh Devy (literary critic, linguist and activist) and the celebrated Bangla author Mahasweta Devi. The group was mainly composed of members of the Chhara tribe, one of the many groups of De-notified and Nomadic Tribes (DNT) in India.

In 1871, the British government, in order to control and ‘rehabilitate’ the nomadic tribes in India (who were not a part of their tax net) introduced a new law called the Criminal Tribes Act, which branded 200 nomadic communities, including the Chhara community, as ‘born criminals’. Post-Independence, this act was repealed and replaced by Habitual Offenders Act, 1952, which gave the police power to investigate ‘suspects’ with ‘criminal tendencies’ and if their ‘occupation was conducive to lead a settled life’. Due to a colonial hangover along with social ostracization and lack of employment opportunities and welfare schemes, Chharas ended up with a reputation of being suspicious, thieves and alcohol smugglers.

Budhan Theatre Group has been active for more than 20 years, and has created around 50 plays, with 1800 public performances. Making street plays and semi-proscenium plays, they have very successfully used theatre to debunk stigmas about the DNT community and relentlessly put forward their demand for constitutional recognition. Some of their most famous plays are Budhan, Bhookh, Encounter, Choli Ke Peeche Kya Hai and The Balcony. Known for their creativity and experimentation, they have performed in buses, trucks, trains, railway stations, huts and are now thinking of devising a performance in a local graveyard.

To talk more about their work and know their story, I interviewed Atish Indrekar, one of the senior members who has been part of the group since 2001. Some excerpts from the original audio of the interview have also been shared along with the text. 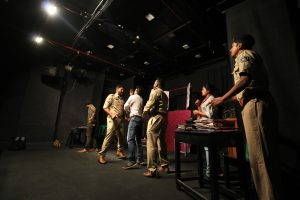 How is the theatre of Budhan different from that of other theatre groups in India?

The plays of Budhan are based on real life incidents. The stories we tell are not fiction; they are our lived experiences. Experiences of what happens to us as members of the DNT community, daily encounters of police brutality, our struggles etc.

When I was studying theatre, I did plays by Mohan Rakesh, Badal Sircar, Chekhov, Tendulkar, but I never did or saw any that talked about what happens with my people in daily life. You are put in the world of modern Indian theatre in a way that you somehow can’t see these things. You might be able to adapt plays, such as Ashad Ka Ek Din, or work on a play by Dario Fo and highlight the problems of the community but the reality is very different. So, for 3 years, I didn’t find anything of that sort there. We did the same plays, following a script etc.

What happened in Budhan was that I got freedom. We could talk openly, and work in a democratic way, which meant that we took every actor’s input into account. People are free to improvise, pause… We never teach them how to do it, it comes naturally to them because we are playing ourselves… Say if in Panchmahal district, a Ramesh Samtha has been beaten by the cops and suffered, so here, even Atish (the actor) has been through that experience and understands that suffering. The artist is able to connect these things together while performing.

Often when we perform, people say our plays are ‘too political’ and that it gets very heavy after watching a play. People are forced to think… that’s important also, no? Because if one just wants entertainment, there are other platforms, but we need to tell our stories through the power of theatre. We also do plays in intimate spaces – black box spaces, empty spaces, bastis, prosceniums, nukkads… we make plays in a fashion that can be performed anywhere and with minimal properties.

In your goals, you speak of getting constitutional recognition for the DNT community through theatre. How do you think this will happen? And why has it taken so long?

The first play we did here in 1998 was called Budhan. The Britishers called us born criminals. We twisted that and said that we are born actors! This has been the spirit of our theatre-making. Budhan has been active for more than 20 years. After every performance we say one thing, ‘I am a Chhara, Not A Criminal’. We are not offenders, we are artists. We are not second class citizens, we are citizens of this country. Before 1998, nobody wanted to come to Chharanagar but after we started making theatre, opened a library and our people went to NSD (National School of Drama), people got to know about the Budhan Theatre group. Through our theatre, we were able to mobilise the community and reach out to people. We first perform our plays for the people in the community, and ask them about what they think before going out to perform. From communities, our theatre went to cities, then states, then the Centre and now even abroad. People’s perception of us changed because of theatre! Today whenever, one talks of the Denotified Tribes, they speak of the history of Budhan Theatre, that through our theatre, we tell our story.

Post the lockdown, people have become wary of stepping out to watch public performances and people are constantly glued to their phone screens. At such a time, what are the challenges of making theatre for you?

We live in ghettos (bastis) so it is difficult to practise social distancing when we have to rehearse. Because of the pandemic, many of our theatre artists ended up taking jobs for survival, which makes it difficult now for them to come together and devote the amount of time they used to earlier. But we are still trying to do things online and are very active.

The biggest challenge has been finding spaces to perform. Since people know about the kind of theatre we do, they don’t like to give us spaces quickly. They say our plays will bring up police permission issues. You’ll see many big theatres in Ahmedabad, but you will find very little theatre happening in Gujarat that sensitises people… very few people do it, and those few are also dwindling due to a lack of spaces. So now we are trying to create our own spaces, such as the digital medium. For my audience, we made a podcast and started doing plays on it, spreading the word through Whatsapp messages in Gujarati and Hindi… but even they are waiting for more physical performances.

Do you feel anything different about being an artist from the DNT Community? What has been your experience of working with other artists?

I really like it… A lot of my friends are upper caste. Many of them also do good, entertaining theatre. I go to watch their plays but when I meet them what gives me immense joy is the fact that I have done my own research and shaped my art, experimenting with different things in my process, and not done theatre of one kind. When I interact with them I feel proud to be from the Chhara community. By being a part of the community, I have gotten to know about so many different cultures… I have gotten to know about the art of Madaris, of Nats, Gadiya Lohars, Dafers, Bahurupis. I have been able to bring all these different art forms into one practice, which is an opportunity many people don’t get. So, I feel very lucky when I meet them. They also say that I’m lucky because I have an ocean within me and I can modify things and make something new all the time.

To know more about Budhan Theatre, visit their website and read here.

Unrehearsed Futures (S3) #11 The Burdens of Witness: writing (by) women in times of crisis Entrepreneurship in Theatre: Young theatre-makers share how they run a theatre company