The Guru-Shishya Parampara with Sunil Shanbag and Sapan Saran

The fourth instalment of Conversations@theDSM saw theatre thespian Sunil Shanbag, and writer, poet, actress Sapan Saran talk about their initiative Tamaasha Theatre, Sunil Shanbag’s plays, the changing trends in theatre, and the relevance of theatre in today’s world.
Continuing with the Guru-Shishya tradition, Sapan who has grown under the mentorship of Sunil Shanbag interviewed the latter on 8 July at the Purandare Hall in Sahitya Sangh. 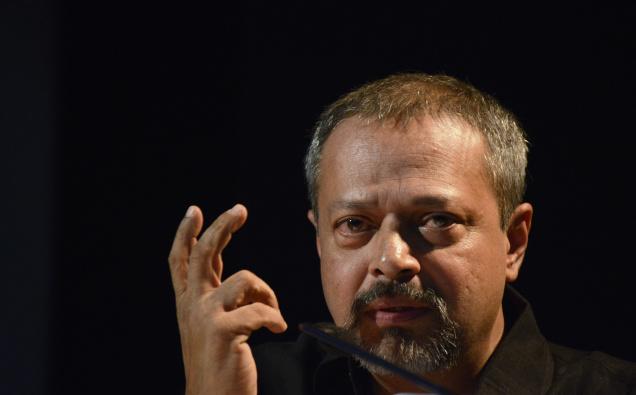 I first met Sunil Sir two years ago, in class at The Drama School, Mumbai. He called me his problem child. Since then, not much has changed. I get flabbergasted and tongue-tied around him every time I meet him, and he being the kind man that he is, tries to deal with me as patiently as possible. In all this time I have accumulated a whole list of questions that I want to ask him. That situation was remedied to a great extent on Saturday, 8 July, when Sapan Saran sat down with Sunil sir at the Drama School, Mumbai for an illuminating discussion.
Sapan and Sunil sir have been collaborating over the last few years. Their first project together was the play Club Desire and in 2015, they co-founded the Tamaasha Theatre. In some ways one could say, that Sunil sir is a mentor to Sapan, like Satyadev Dubey was to him.
Let’s rewind a little bit.
The year was 1966. India had already seen three Prime Ministers in January itself, and a young eight-year-old Sunil Shanbag was boarding train by himself to go to Rishi Valley School in Andhra Pradesh. Then one day in class, his teacher mentioned that he’d be directing a play and asked them if anyone of them would like to be in it. This information came as a revelation to a kid trying to blend in. Despite not knowing anything about theatre, Sunil Shanbag’s hand immediately shot up into the air. On show-day there was an accident where the curtain rose while he was taking still his place on stage. It was awkward and they had re-do the bit, but from there on everyone in school knew who he was. “After that I was in every play that my drama teacher directed.”
After school, he returned to Mumbai and began to do theatre in the city. Dina Pathak, whom he had worked with back in school, got him in touch with Satyadev Dubey. “I kept thinking if only I had joined him five years earlier. Dubey had directed Andha Yug. The critics say that was when Dubey was at his peak.” Later, while answering a question from the audience mentioned every play and every period is important. Having said that Shanbag Shanbag was blessed to join Dubey at a time, when he was regrouping. His core group of actors had moved away and begun to do their own work and he was looking for new talent to work with. Before he knew it, Shanbag became an integral part of Dubey’s Theatre Unit, so much so that his parents felt like they had given their son to him. He went from (doing odd jobs, to) acting in his plays, to assisting him till eventually he was allowed to conduct rehearsals by himself. Dubey was an eccentric man. When you worked with him, “his friends became your friends and his enemies your enemies.” Other than noted theatre stalwarts in the city, the NSD was out of bounds for Shanbag because Dubey hated the NSD. And so, Shanbag was stumped when Dubey went on to direct plays there!
Each theatre group back in the day had it’s own core crew, and you were expected to work with only your group. While Shanbag understood that, he also wanted to be able to sit in on other people’s rehearsal and process. He soon realized that while the theatre circuit was filled with great actors, they had very little technical knowledge. So he began designing and operating lights for other groups. This allowed him to move around freely without being constantly chided by Dubey. Eventually, he was thrown out by Dubey and asked to run his own company. In 1985, he set up the theatre company Arpana.
Almost everybody that did theatre back then, also kept a day job. Most people worked in banks, for a banks had reservation for the arts and had fixed timings, so post five you were free to do whatever you wanted. Shanbag on the other had assisted Shyam Benegal and worked as a documentary filmmaker on projects such as Yatra, Surabhi and Bharat Ek Khoj. This was before the privatisation of television. In 1994 he won the National Award for his documentary film Maihar Raag, on the Maihar Gharaana in Madhya Pradesh.
Whether it’s Maihar Raag or Cotton 56, Polyester 84, there is a specific social objective. He says that it has something to do with where he comes from and why he is an artist. You have to know as to “why do you want to do this play?”
There is a lot more, so watch the video, and be there for the next talk with Mohit Takalkar and Alok Rajwade on the 19th August, at The Drama School Mumbai, at 5 pm.

Conversations@theDSM: Mohit Takalkar and Aalok Rajwade Public Spaces in India: How performance and art can revitalize them