The DSM Comes to Thane

wpadmin Past Events and Announcements 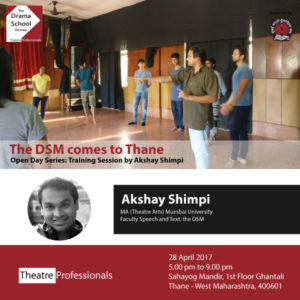 After successfully conducting workshops across Mumbai, Pune and Delhi, DSM Open Day comes to Thane for the very first time!
Thane has traditionally been a place which cares about its arts and culture. And it is with the same love for the arts and theatre that DSM visits the city.
Get a chance to experience world-class training and know more about the Post Graduate Diploma in Acting and Theatre-making at The Drama School Mumbai during its Open Day Series which has already travelled to 3 other cities. Here leading theatre-makers, who also happen to be DSM faculty, will show you what students at the school are taught as a part of their training. This is an excellent opportunity for you to witness first hand what makes learning at The Drama School Mumbai the best stepping stone for a bright career in theatre.
About the Facilitator:
Akshay Shimpi
Akshay Shimpi has a Masters of Arts degree in Theatre Arts from the Mumbai University. Akshay is a well revered theatre-maker with over a decade of experience in the field. He is the faculty for Speech and Text at the DSM.
In over a decade of working in theatre and film, Akshay Shimpi has done more than 30 plays and 7 short films that have toured festivals across India. He performs in both Hindi and Marathi and has been part of productions like Naag-Mandal, Ghashiram Kotwal, Hayvadan and Ram Sanjeevani ki Premkatha. He received acclaim for his portrayal of freedom fighter Anant Kanhere in the Marathi film 1909. His recent work with Astitva, Agdeech Shoonya is currently touring across Maharashtra.

ExpressionLab@theDSM: दशानन: A solo performance by Harish Kulkarni The DSM Comes to Chennai!