The DSM Comes to Chennai! 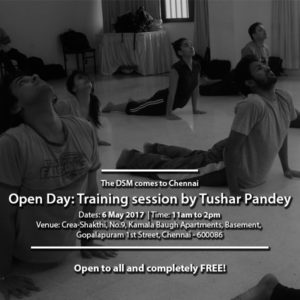 The DSM’s Open Day series visits for the first time in Chennai! And it is completely free and open to all!

At the DSM Open Day, leading theatre-makers, who are also DSM faculty, will show you what students at the school are taught as a part of their training. This is an excellent opportunity for you to witness first hand what makes learning at The Drama School Mumbai the best stepping stone for a bright career in theatre.
After successful Open Days in Bangalore, Mumbai and Pune, the DSM Open Day now comes to Chennai for the FIRST time ever.

About the Facilitator
Tushar Pandey
Tushar is an India based Actor, Director and a Teacher. He is an International awardee, with specialisation on Lecoq’s pedagogy from the London International School of Performing Arts (LISPA) and a graduate of the National School of Drama (NSD), India, Tushar has been practising performance since 2003. During the last eight years, he has been associated with various projects in India and the UK, performing, conducting workshops, creating works from classical styles to site-specific contemporary, acrobatic and mask-based works.
Apart from performing and creating work for stage in India, UK, Greece, China, Dubai, Tushar acted in a pivotal role in acclaimed film ‘PINK’, released in 2016, and has also played a lead role in an independent film, ‘Beyond Blue’, which premiered at Marche du (Cannes Film Festival 2015). He received Best Actor special mention at a festival in Rome in December 2015.
Tushar’s work concerns highly visual movement-and-text based combinations of fiction and non-fiction sources and is presently devising works to develop performance language and create new expressions that go beyond existing performance boundaries. Tushar is the co-convener of The Drama School, Mumbai and has been a visiting faculty at National School of Drama, New Delhi.
Oh, and the Open Day is completely FREE and open to all!
To sign up, write to us on info@thedramaschoolmumbai.in or give us a call on 9619336336.