DON'T PANIC: GST and its Impact on the Performing Arts

GST and its impact on the Performing Arts

The Goods and Services Tax was finally rolled out on the 1st of July 2017 at the stroke of  midnight. After all, our Government does have a flair for the dramatic. But what really, is the fuss and mayhem about? Over a hundred and fifty countries have implemented  GST (roses by other names) over the years and their populations came through the capitalist scourge just fine.

India’s version of an overarching goods and services tax has been 17 years in the making. It’s faced a lot of resistance, as you might guess, from various lobbies and people wary of what a uniform tax could mean for their business. The powers that be, speak of it as a way – the only way – to reduce corruption (wait, what was demonetization for then?), prevent tax-evasion and improve the overall efficiency of the system. And as we are settling into the first month of its imposition, with vendors and suppliers showing no signs of stopping to use it as an excuse for delays – let’s re-examine the alarmist outlook towards ‘one nation, one tax (sans momos)’, shall we?
Disclaimer: This is in no way an attempt to downplay the implications of the GST, no one’s saying this is a hoax created by the Chinese (not yet, anyway), but let’s look at all the facts and figure out what the GST means (for the theatre and arts community at least). 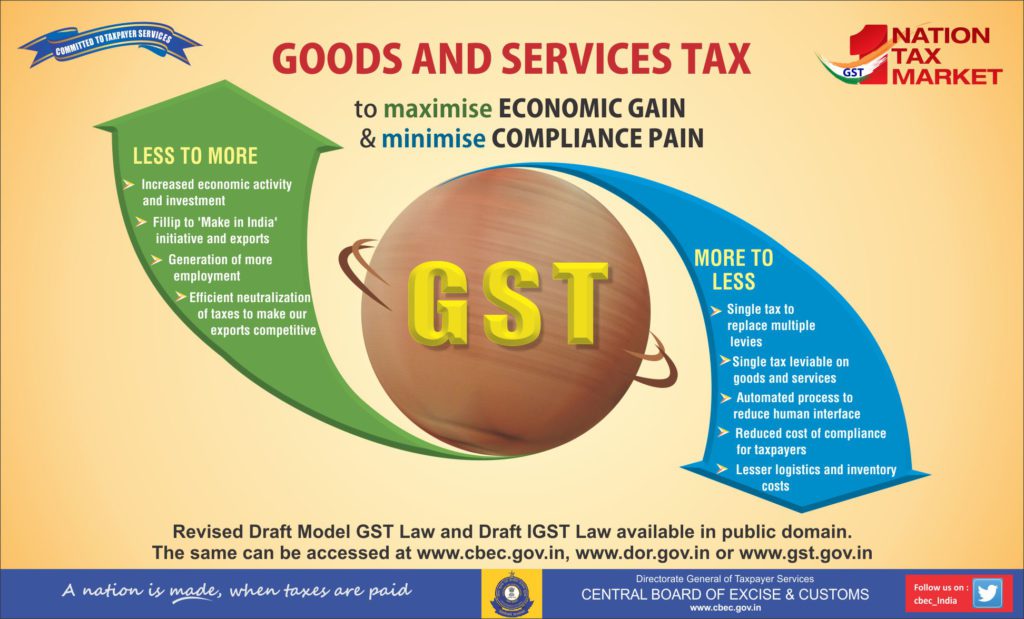 Taxes on Art prior to the GST
Artwork such as folk paintings, ceramics and antiques were levied with VAT, but were also exempt in certain states. Entertainment tax on movie tickets was 8 to 10 percent, with Maharashtra being an exception ranging from 15-45% (some kind of vengeance for past crimes, we believe). Regional films, however, were exempt. Dance and music events were at a cool 10% (NH7, you listening?). And theatre was exempt.
And now…
A uniform art tax of 12% may or may not be a slight improvement. One side speaks of a danger to the livelihood of artists and artisans at the lower rungs of the pyramid. On the other hand there is skepticism about whether people will stop buying art because of 12%.
As of 11th June, the GST Council places movie tickets under Rs 100 at 18% and anything above that at a ginormous 28%. No exemptions. We’ll just let that sink in for a bit.
Performances – whether they be the Maganiyar Seduction or the your neighbourhood community theatre’s adaptation of Shakespeare’s Midsummer Night’s Dream – are all going to be treated as one. Tickets to dance performances, music concerts and plays that are priced above Rs. 250 is at 18%.
But here is the cincher. CA Chintan Shah, who was part of a discussion conducted by United Kalakar in Mumbai, GST 4 Artists, clarifies that unless a theatre company has a turnover of over 20 lakhs per year they are not liable to pay GST. Thus, GST laws do not apply to the average practitioner and this in itself, is an exemption of sorts being given to those within the performing arts community.
But what about the bigger question of arts (and artists) being exempt from paying taxes? It’s the principle of thing, after all. We asked Noshir Dadrawala of the Centre for Advancement of Philanthropy to weigh in. According to him, “Performing arts and performing artists are of all kinds. But, let’s say, performing arts where India’s National culture or heritage is being preserved or promoted, there should be a GST exemption.” This of course does not allay the woes of contemporary practitioners, who struggle for funding, resources and a fair share of the market while doing the critical work of developing artistic discourse in the country.
Chintan Shah offered a couple of solutions to those who cannot escape the burden of GST. Unfortunately, both of these entail writing to the government to change the terms under which GST can be levied. Firstly to demand that GST only be levied on tickets priced above Rs. 500 and secondly, to amend the law so that amateur theatre groups may start off by only paying 12% GST for, say, the first three years.
What amateur means in the Indian context though, is highly debatable.


Jagriti Theatre, a multifaceted space for the performing arts in Bengaluru has taken the lead on the idea of petitioning the Government to gain exemption from taxes. They, in fact, are demanding a complete exemption for the performing arts. This is not completely unprecedented. Several European countries offer tax exemptions to the arts, even going as far as granting rebates on property tax to cultural centres, arts organizations and related institutes. The primary concern in the Indian context, according to Jagdish Raja, founder of Jagriti Theatre, is not for the audience as much as it is for the theatre practitioners who may have to forgo necessary expenses for the production in order to stay within the Rs. 250 budget.
A big cause for concern is that registration under GST brings with it the need to hire a Chartered Accountant and that’s an expense that majority of artists may not be able to afford. According to Noshir Dadrawala, “GST compliance involves several layers and what may apply to one artist may not apply to another.” And that essentially translates into getting professional help.
A moment to reflect on the bigger picture…
It would be a little extreme to state that this move by the government is penalizing art. But it certainly is commodifying it. And at one end those of us, who looked at our first tax returns as the real entry into adulthood, are thinking – maybe this is a good thing. Because if you are taxing what I do, then I won’t have to spend a lifetime convincing my parents, in-laws, friends, clients, audiences et al that ‘theatre is a real job’. This tax could be a real paradigm shift in the way people view and consume art of all kinds and somehow, ironically, a tax, will finally reveal the true value of art. But on the other hand, where is the associated education of the proletariat that should go hand-in-hand with this proposed change? Where is the support that takes the burden of turning profits away from individual practitioners and places the responsibility on the consumer of the practice? And who needs to talk about this – the ex-engineer climbing her way up the Open Mic circuit or the practitioner who commands the headlines?

Well, there is always room for interpretation and if there is one thing this sector believes, it is that no one truth can save us all. And yes, while it is true that unless you are turning 20l or more each year, you can more or less proceed with life as in (albeit paying more for tampons and the next Avengers movie), there are still a few things we should start doing:

A towel may not help, but don’t panic. We may not be economists, but we are artists. We can envision solutions and taxes or not, that’s where the future starts.