The Curious Case of a Farmer/Writer 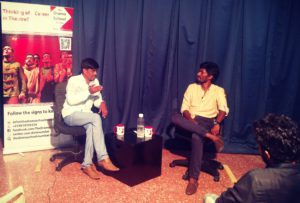 At the third instalment of the lecture series, the conversation revolved around the celebrated play Shivaji Underground in Bhimnagar Mohalla. The playwright, Rajkumar Tangde, was interviewed by the lead actor of the play, Kailash Waghmare. Both Rajkumar and Kailash, apart from being colleagues, are also great friends and mentor each other throughout their artistic endeavours.

Historical figures have often been used by political parties to their own end. In the state politics of Maharashtra, Shivaji is one such figure. The play, Shivaji Underground in Bhimnagar Mohalla, provides an alternative and a humane history to the founder of the Maratha empire in the 17th century. The play exposes the political parties who have literally “kidnapped” what Shivaji stood for. It brings back the importance of debate, the need to revisit history and search for answers and rebukes political propaganda. The play is of particular importance today, almost five years after its inception, due to the increasing influence of a majoritarian political party while suppressing minorities in the Indian scenario.

The interview itself was a great mix of fun and serious topics. It started off with a question from Kailash Waghmare about how Rajkumar Tangde could write something like a Shivaji Underground in Bhimnagar Mohalla, a play commenting on societal issues, on one hand and how he has also written a romantic novel on the other. Rajkumar responded with the fact that as a writer and a human being different things affect him at different times and writing is an extension and expression of himself. Hence, Malyavarcha Phool, the novel came about.

Waghmare then moved to asking how writing fit and where it came from in Rajkumar’s life which was filled with handling a farm, roaming around on bullocks, and just being about in the rural life. Waghmare even added that a poem here and there, or even a novel would have been understandable, but how does a play fit in this whole scenario.

Rajkumar said that as he grew up, he realised the true problems while living that life. Those problems needed an outlet, an expression, and a search for a solution. As he read more and more, and experienced more and more, he realised that expressing these concerns are not only important for himself, but also to let the world know what he wants to say. That’s how writing came into the picture. And somehow it was always a play that he wrote. The novel happened much later.

Rajkumar also told how two of their other plays, Kaay Dila Swatantryane and Aaakda, had done decently well. But they were not expecting Shivaji to do this well, either. But it happened, and it was great. He said, “Sambhaji (his brother) and I were planning to do something around Shivaji Maharaj. And that’s when through pure coincidence, Kailash came to me with Shahir Sambhaji Bhagat’s concept. It took a year and a half for us to finish the script. The 13 actors used to leave everything, all their jobs and come for rehearsals in 10-day batches every month or two. It is that sacrifice, which even today they do for the play, is what will sustain this play in the future.”

“After Nandu Madhav came onboard as the director, and we were done setting the play up, we needed a producer. We performed in front of about 4-5 different producers but none of them were ready. They were unhappy about not having a celebrity face, the topic being too controversial, or it just not being a good play in their view. Nandu sir helped us not lose hope and we somehow managed to find a stable producer in Rangmala eventually,” informed Rajkumar.

When they wanted to advertise the first show, the newspaper wasn’t ready to publish the advert due to the controversial nature of the title. So they had to add a line in the add, ‘Naav vachun dachku naka, Naatak bagha, Sobat ya!’, which means ‘Don’t be shocked by the name of the play, watch the play, and join us.

One of the most interesting things Rajkumar Tangde said was that an artist should not forget that he/she is a human first. And that the slogan ‘show must go on’, as cool as it sounds, should not be followed to the tee. That was a lesson for all the thespians to remember, just like the lesson in history that the play intends the audience to remember.

Documenting Theatre in India: Research in to Theatre Lives Aadyant 2017 – Not the end, but the beginning