“The prelude to making theatre online shouldn’t be a compromise from doing theatre offline, but rather experimenting with something that cannot be done offline. There should be a reason for it to be on the internet and be live. There’s scope to experiment with this new language that is being developed.” – Karan Talwar.

The second edition of Curated Conversations hosted the dynamic founder of Harkat Studios; Karan Talwar. He describes himself, first, as a “maker” who comes from a multimedia background and, then, a filmmaker, artist and curator. Just like Talwar, Harkat Studios also likes to dabble with different forms like film, new media, community art spaces and contemporary art. When the pandemic shook the world and live stage performances came to a halt, Talwar and his team at Harkat Studios saw an opportunity to explore theatre in the virtual world. It started with a simple question, “Is it possible to do theatre online?” The answer was simple: No. However, what they did realize is that there is scope to make theatre that is fit for the online medium with the help of existing technology and turn it into a new experience for the audiences. This gave birth to the idea of Harkat’s Virtual Interactive Stage.

Using Internet as a Medium to Present Art

With the world shifting online, the idea behind the Virtual Interactive Stage was to use the internet as the medium to present art, similar to how there is a physical stage, celluloid film, a canvas, etc. used for different kinds of art. Based on this, Harkat began experimenting with existing resources and infrastructure that they have built over the years through different curatorial programmes they undertook. Talwar says, “We’re at a very nascent stage as an industry for using this new medium. The ideas are hence borrowed from places like reality TV, live cricket, cinema etc. and are being retrofitted to doing theatre for the internet. The concept existed even before the pandemic but now a new language is being developed around this and the process is sped up to satisfy the needs and demands presented to us.” 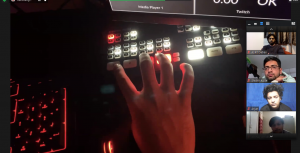 At the beginning of the pandemic people were trying their best to put out some form of theatre, as and how they could. There were shows over Zoom which were essentially live moving images from the medium’s point of view. According to Talwar, what they ended up presenting was a low-quality experience and a compromised show. Such a model isn’t sustainable because the competition in this segment is giants like Youtube and Netflix. Taking all this into consideration, the first step was to be able to provide a high-quality product with a multi-camera setup, a live-switcher to change between them, and get the audio and light requirements right. With years of experience in filmmaking, Harkat brought in some elements of the cinematic language to this as well.

The ‘Experience’ of Watching Online

The second issue that the Virtual Interactive Stage wanted to help solve was the whole “experience” of watching a piece of theatre online. With Zoom as the primary medium used, the audience had to enter “meetings” and focus on being on mute, keeping their video off etc. It’s primarily not a platform for artists. Talwar wanted to create a platform that catered to the needs of artists and the audience and his background in coding aided this approach. All theatre-goers reminisce about the whole experience of watching a play; right from entering the foyer, hovering around and interacting with each other, entering the space and then engaging with the piece being performed. In order to provide this whole experience, every audience member got a URL for plays performed on their Virtual Interactive Stage. The URL required you to enter a personalized and anonymous name & password. It also provided allied experiences like hovering around links that are provided, a chat-box to make it interactive, etc. The aim was to keep it minimal but experiential. 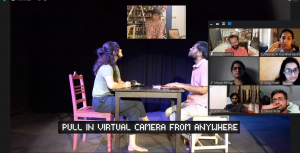 With every new show, the Virtual Interactive Stage experimented with something new and upgraded itself to fit the needs of the performer as well as the audience. In Talwar’s words, “We cobbled together whatever tech was available to us. Like a building made out of pipes that are just screwed on.” Such experiences are setting the precedent for young theatre makers to be able to imagine what their future might look like and to envision a new experimental medium.

“For Harkat Virtual Interactive Stage, every show has to be performed live,” Talwar asserted. He went on to explain that according to him there are several problems with “pre-recorded theatre shows”; you can’t get audience commitment like signing up and showing up at a certain time for the viewing. The element of “being live” is key for the Virtual Stage according to him. For all the shows performed on the platform, the performance team came together with Harkat’s team to develop the piece. It could either be performed from Harkat Studios or from their homes with the live-switcher aiding intercuts to make it feel like a complete experience, almost like a film being performed live.

Another problem they tackled was Audience Engagement during virtual performances. Talwar says the answer was to go back to the days of Yahoo Messenger where people had anonymity to do and say whatever they wanted. With Zoom, people’s names and faces are seen so they feel like they’re put in the spotlight and will be accountable for what they say or do. At the Harkat stage, the audience could enter with any name which helped to increase engagement. 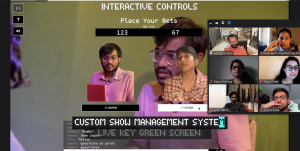 They also experimented with different codes of interactivity like in the performance of Age of Prism. The audience could bet on something, click on certain things etc. which gamified the experience that made people more comfortable to be a part of it. This idea of building different codes of interactivity holds a lot of potential just by itself. It makes the audience ‘participants’, not just passive viewers.  He cites Age of Prism again as an example, wherein the performers and the format turned the mirror back on the audience and made them reflect on their actions through the course of the play. Creating these codes of interactivity is about understanding the pre-existing tools and concepts that the audience is comfortable with like voting, picking, clicking etc. and to expand on them, politically or otherwise. The future this holds excites Talwar, especially the possibilities of combining things that are done digitally and manifesting them in the physical space. Like the audience turning sound on and off, lights stronger and softer, deciding what the character does next etc. It makes them feel in-control and more engaged. The need of doing theatre digitally is to go this extra mile to make the audience feel safe and engaged.

When it comes to accessibility of this medium, Talwar believes that, unfortunately, there is a wide gap that needs to be bridged by the community as a whole. The idea of accessibility in the Indian context is difficult by itself, because of lack of required technology, the language used for interactions and will be a struggle for the next 10 years, at the least. In the global context, platforms like Harkat’s have potential to launch and give space to young new age digital artists to go on to a global stage. It opens up new audiences for young artists and take the idea of Indian art, Indian aesthetics and Indian thought to a bigger context because Indians have something extremely unique to offer.

Talwar concluded with a thought that should be on every young theatre maker’s mind; “It’s important to give exposure of the Indian context to the world outside. This is where the industrial and economical umbrella can branch out. Go out into the world. That is where you should be.”