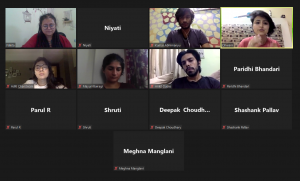 This edition of Curated Conversations with actor, director and theatre educator, Dhwani Vij, was a deep dive into her one-of-a-kind digital hybrid production Rat. Dhwani says, Rat defines her process of theatre-making. Her process is influenced by what is happening at that moment in the life of the people who are making that performance.

How did Rat happen?

Bertolt Brecht’s seminal play Fear and Misery of the Third Reich, which consisted of numerous ‘playlets’ or short incidents based on the horrors of Nazi Germany in the 1930s, was one of the first works Dhwani read. It instantly resonated with her. Its boldness and fear appealed to the group, who chose to recreate it by drawing comparisons with present-day scenarios. This led to the conception of their production Rat.

They started devising it as a play to be performed physically with three spaces: First to be considered as museum, second as performance and the third for the audience to leave something behind and for a new audience to witness it.

Dhwani added, “As the pandemic happened, the online space opened our homes for performances. Home is a space that you live and breathe in, which gets designed and curated by you every day, conscious or unconsciously. Performers introduce us to their homes and audiences make their own connection with the space. Rat came out to be nothing like it was imagined first.”

Emphasis is given on the way that education is delivered. Is it a group or an individual exercise? Where are we holding it: an open or closed space? In the digital space, material and architecture of the space you are in becomes more important than the relation between people. The objects and material around us become our co-actors. There’s a very special relationship between an actor and the objects. Objects have historical powers; they talk about certain difficult things which couldn’t be talked about otherwise. Dhwani said, “The digital space made me look at the objects in a different way. Be it performing or be it teaching.

The way a performer thinks of audience also changes in the digital space. Even the way forum theatre engages with the community has changed because of the digital theatre. Suddenly, there’s an added hierarchy of who’s the host or co-host in addition to director, rehearsal manager etc. All of these decisions impact the way information is shared, understood and attended. Personally, I encourage personal explorations and keeping interactive space with my students.”

When asked if the directors’ role is diluted due to digital space and whether we are moving towards real collaboration as there’s no one person who is managing everything, Dhwani shared that she personally started seeing this dilution much earlier in her life. “It just came into the conversation because of digital theatre where ensemble or co-created spaces were considered as amateurs or college theatre, and not professional. Now, you can’t escape from that conversation anymore,” she explains.

“I have seen playwrights who are also directors. They conduct workshops with actors and jot down points or scenes from actor’s improvisations. So, we can see all of these roles shifting already. Just because of the digital space, these conversations are up front now and we have a common vocabulary to talk.”

In that case, what is theatre?

If we come to think of what is the one thing that theatre needs to be called “theatre”, we could come down to only one answer – the liveness of it.

We define theatre using such parameters. Definitions help us to ground ourselves. But theatre has been breaking them all along and providing a counter narrative. The digital space has spotlighted a new element of theatre which is making connections with people in a different time zone. In this digital era, we can even consider people connecting through digital medium a central part of theatre.

Now, an interesting question arises through this, said Dhwani. “We connect with people through Facebook or Instagram videos, reels, Live etc. Can that be considered theatre too, then?”

“Sadly, there’s no money, no state sponsorships for theatre in India,” Dhwani says. “But what sustains the theatre community is the community itself. People who lean on to each other, support each other constantly.”

In terms of continuing the digital performance, Dhwani said she can’t ignore what digital space opened for her. She admitted that it demands more attention and investigation, but at the same time gives her much more agency to create, something she wished to explore further.

Unrehearsed Futures (S3) #5 Corporeal Vocabularies of Resistance and Potentiality Tick, Tick, Boom: Theatre as an Antidote and Solution to the Climate Change Crisis