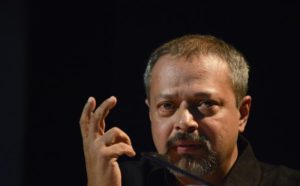 Fourth instalment of Conversations@theDSM brings to you theatre maverick Sunil Shanbag, and writer, poet, actress Sapan Saran, who will talk about their initiative Tamaasha Theatre, Sunil Shanbag’s plays, the changing trends in theatre, and the relevance of theatre in today’s world.
Continuing with the Guru-Shishya tradition, Sapan who has grown under the mentorship of Sunil Shanbag will be interviewing the latter.

About Sunil Shanbag
Sunil Shanbag is a theatre director and producer based in Mumbai. He started his theatre work with Satyadev Dubey in 1974 and worked with him for ten years as an actor, designer, and director before he founded the Arpana theatre company in 1985 with a group of his theatre colleagues. Arpana remains an active theatre company till date and has several notable productions to its credit including Ramu Ramnathan’s Cotton 56, Polyester 84, Sex, Morality, Censorship written by Shanta Gokhale and Irawati Karnik, Stories in a Song made in collaboration with Shubha Mudgal and Aneesh Pradhan, Club Desire written by Sapan Saran, and more recently, Loretta written by Goan writer Pundalik Naik.
In 2015 he co-founded Tamaasha Theatre with Sapan Saran to broaden their definition of theatre, seed the city with intimate, alternative art venues, and work with younger theatre practitioners. Sunil has been actively involved in theatre training, and documentation projects which include the book Scenes We Made, edited by Shanta Gokhale, which traces the history of experimental theatre in Mumbai from the late 1950s to about 2000. He is also part of the core team of SMART, India’s only strategic management programme for theatre, which has worked with about 30 theatre companies from across India over three years. In addition, Sunil has been an independent documentary filmmaker, been involved as a writer and researcher for large scale television projects such as Bharat Ek Khoj and Surabhi, and community history projects such as museums and oral history archives.

About the interviewer: Sapan Saran
Sapan Saran is a poet, writer, and an actor based in Mumbai. She is a founding member of the theatre company, ‘Tamaasha’, which aims to explore new theatre ideas in alternative spaces.
Her association with theatre began with a collaboration with dancer Astad Deboo. She has written Club Desire, and Classics Redux, which have been directed by veteran theatre director Sunil Shanbag, with whom she also co-directed the play Marriage-ology. Her first play, Club Desire, a Theatre Arpana and National Centre for the Performing Arts (India) production, was selected for National School of Drama’s International Theatre Festival, Bharat Rang Mahotsav 2015. The Churchgate Couple, a short 10-minute piece from Marriage-ology, written by her, garnered appreciation by critics and audiences alike. She conceived the critically acclaimed production, ‘Blank Page’ in 2015. Her most recent play is ‘Waiting For Naseer’, a quirky, philosophical comedy, that she has written and directed.
She performs regularly as a theatre actor, has modelled in several advertisements, and acted in films. Her poems have been published in several magazines, including the Sahitya Akademi’s Samkaleen Bhartiya Sahitya. Recently, the hindi magazine, Samved, came out with a supplementary book that contained 50 of her poems.

About Conversations@theDSM
Conversations are a tradition in theatre. And so, the DSM brings an entire series of discussions, talks and conversations, curated for the first weekend of every month. Our purpose in these conversations is twofold. First, we celebrate the bond between guru-shishya. Teachers in school, professors in college, coaches at the gym and directors in the rehearsal hall – all mentors have taught you something through conversations. That something makes you the person you are today.
The second purpose in these conversations is to celebrate Rekha Sabnis.
Rekha Sabnis was a one-woman theatre army. She ran theatre group Abhivyakti from her house. She took care of sets, costumes, bookings, transport, tickets as well as acting and directing. Abhivyakti starting performing at the Mumbai Marathi Sahitya Sangh, the same building that houses the DSM today. Rekha Sabnis was a key force behind the DSM-Sahitya Sangh partnership. And this partnership makes our work forging a new generation of theatre-makers, possible.
Rekha passed away in September last year, studying elements of the Natya Shastra till the very last.
Conversations@theDSM started in April. It is our small way of paying tribute to a great spirit who made theatre a little bit better for us all. These conversations form part of an ongoing series of talks between theatre-makers young and old. The entire series has been curated by Yugandhar Deshpande and Anuja Kale of TheatreAcross.

Adrak@theDSM – Niketan Sharma brings his new play to the DSM Documenting Theatre in India: Research in to Theatre Lives