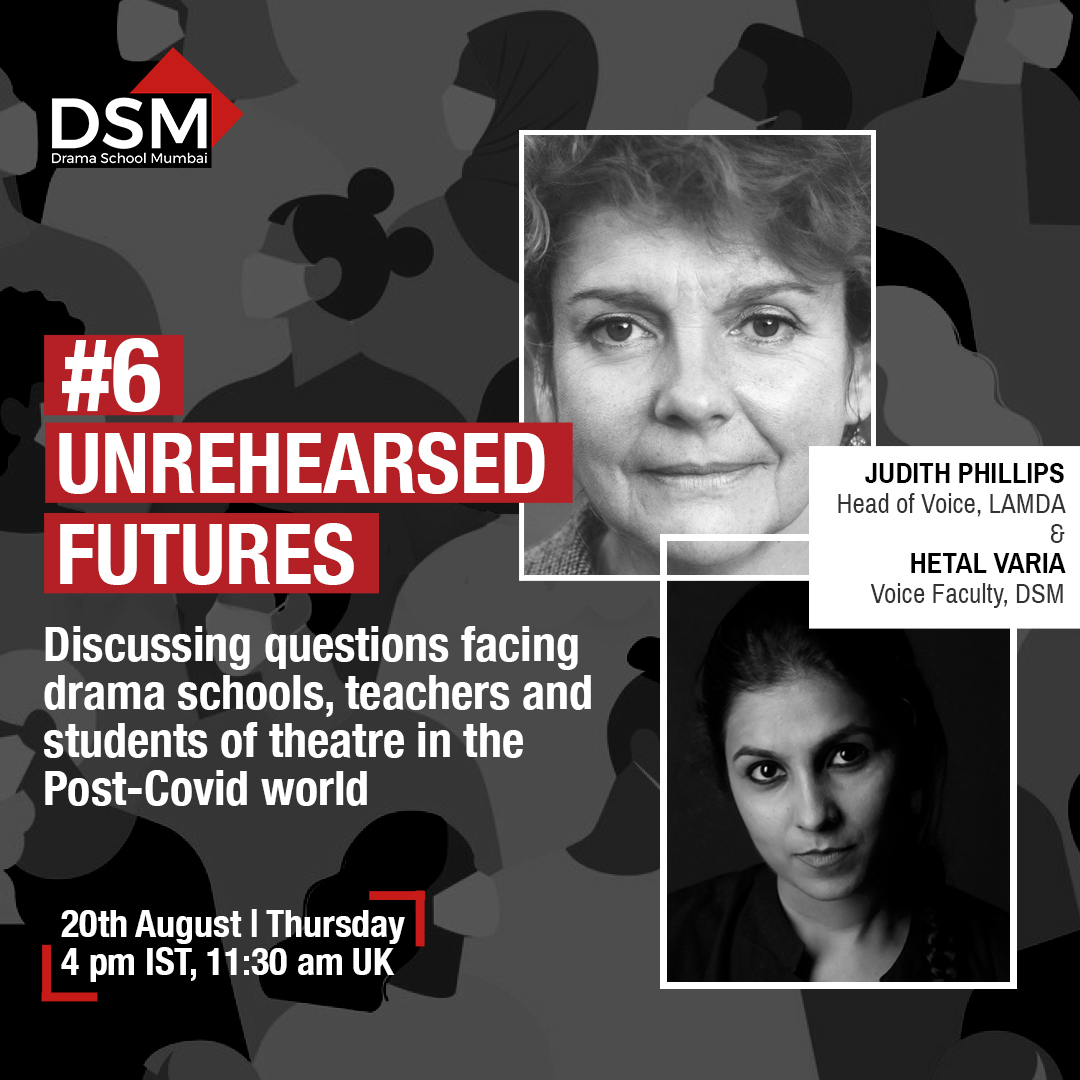 A voice speaks volumes about a person. Voice work is considered a crucial element of actor training in drama schools around the world, closely connected to movement and acting. The late vocal coach Kristin Linklater believed that to free the voice was to free the person. Freeing the natural voice of an actor is key to be able to portray characters truthfully on stage.
With voice training, it is often a psycho-physical exploration guided by a facilitator who needs to be in the room with students to see where each individual is, what their bodies are like, help them release tension in their bodies through physical touch, check their resonance, breath support etc. But, when the COVID-19 pandemic forced everyone to move out of public spaces, it was a huge challenge for voice pedagogues to transition their teaching online.

“How does this sit with practical training, such as training a voice, where self-discovery needs to be held and guided, especially in the establishment of the basic technique? Would you let a beginner loose with a chainsaw in a woodwork class, especially if they were working on their own?” asked Judith Phillips, Head of Voice at the London Academy of Music and Dramatic Art (LAMDA) at a recent Unrehearsed Futures session.

LAMDA closed on 16 March, 2020. At that stage, there were a few weeks of the Foundation course (2-semester course) left which was moved to Zoom quickly. However, other courses at the time were suspended, whilst teachers decided to begin online learning from 28 April onwards. “I’ll be honest with you. I think, I can safely say all of us had either very, very little experience of teaching online or absolutely none,” she says.

“What we did was split our cohorts into what we call clusters of about five students. There was some teaching in larger groups of 30 and 15 and some rehearsals involved larger groups, but for the most part the teaching was in small groups or one-on-one,” Phillips adds while explaining that the arrangement turned out to be quite expensive.

Phillips has spent all her teaching career encouraging students to tune into their senses in order to encourage an imaginative and a visceral engagement with language and communication. She believes that students over the years have become increasingly visual. Her work involves waking up the idea of smell and taste and touch and how these are pertinent to breathing life into a text. She believes in encouraging the slow, careful listening in a world where the average time spent online is around 10 seconds as one surfs the net. So, for her, it is crucial to ensure that students stay in touch with the world around them, especially during this pandemic, and continue to relate this to their imaginative exploration of text.

Phillips filmed herself doing warm-ups and recorded auditory and text exercises so that students could work in semi-supine. These were sent to students to keep them ticking over till classes began online. They also had to deal with students in different time zones. They were students from Australia, New Mexico, Canada, US and from all over Europe. “So you can imagine that the practicality of it was an absolute nightmare to try and sort it all out. Most of the sessions lasted one hour, because we thought that would be enough online,” she says, adding they also had 30-minute one-on-one sessions which focused on individual challenges with voice, rehearsal support and so on.
In the beginning, Phillips found it hard to facilitate proprioception – awareness of the position and movement of the body – on Zoom as everyone was in tiny squares, visible till their shoulders, the rest of the body hidden. What exacerbated the situation were Internet connection issues, the blips and freezes, making it harder for her to understand the students’ sound quality.
However, she found it possible to work live and on one’s feet online much more than she thought she could. Being able to see people’s feet in a physical classroom in a crucial part of her work as all of it begins from the feet upwards. “And I work a lot with the downward connection into the earth, the downward trajectory, and then the upward energy of the spine, through the crown of the head. This was very, very hard to do,” she shares. She devised a short seated-vocal warm-up where the pelvic bones were equivalent of the feet.
“I realized that if we closed our eyes and we covered them with our hands, we could have a kind of soothing, velvety darkness away from the screen, and focus on space in the pharynx, `space for the breath, the lower abdominal muscles and the sacrum,” she says, adding the intention was to tune into the body while in a seated position and keep the sense of the physical alive. But, she admits that even if she was trying to get her students up on their feet, they were doing a lot more sitting in this online space than accustomed to in a shared physical space. Eventually, she encouraged students to lead warm-ups as well. She also found that accent and speech work worked fairly straightforwardly in this medium.

There is a sense of living in a nightmarish, parallel reality pervading all of the learning, feels Phillips. “It’s beautiful and gifted young actors that I’ve got who are now confined, they’re stuck and they’re really frightened. So I felt that a lot of my work was a very strong duty of care towards them, to hold them and to encourage them, and keep them positive without being ridiculously unrealistic about everything.”
Teaching voice work in a virtual space is hard because the work is physical and it is hands-on. “It’s about shared space. It’s about shared breath. It’s about the thrill of working with excitable air, and we could have none of that really. Students were frustrated with the pressure of having to be continually creative online, and come up with new ideas all the time. All they wanted was to be together,” empathises Phillips. She also says that it is difficult to feel expansive, warm and generous vocally if one doesn’t know where one is sending their voice. If on the phone or laptop, there is a constant split focus which makes it hard for voice to travel. Phillips feels that, though voice can be exposed (experienced better here?) through proprioception, the intention to speak has to involve communication and release of those vibrations. This becomes difficult when one is not in the same room as others and knows that technology is unreliable.
There were also instances of students who were unable to work easily in their home settings which threw up how unequal everyone was. “So politically, that’s really difficult. It’s not shared. It’s not equal. If somebody can hear you, if you’re sharing a room, if you have to work in your bedroom in a tiny space, it is very, very difficult. Nothing replaces the equity of a shared space,” she believes.

Despite the many challenges, there were some silver linings. Phillips noticed that some students who were generally quiet in the classroom and worried about feeding back, really found their online presence and a voice. “They sort of felt safer in a way to contribute more to the class,” she shares. They could also hear their sounds much better in their individual spaces as LAMDA has some very echo-ey spaces. Students also adapted to the medium creatively with renaming themselves as the character, passing objects from one screen to another, finding garments to help them find their character etc.

What also helped were the 30-minute one-on-ones with students where the focus was on individual challenges and tensions. But she emphasised that, because the students had already had at least two terms’ training the on-line work was helped by an established shared physical/verbal vocabulary that could be tuned into. She was concerned that it may be much harder starting the work in this form. it was relatively easy, because there was already a shared vocabulary established, physically and verbally.

Coming Back to the Live Space

Phillips was heartened to find that students who prepared work online and then returned to the live space, quickly adapt from one realm to another vocally at LAMDA. They experimented with maintaining a two-metre distance on stage which meant actors needed to extend to each other a little bit more which is great for exploring voice and different acoustics.
A large part of voice work is allowing oneself to become vulnerable with the self and those around them, which is hard to do anyway. But this becomes harder when there a bigger distance between people now. While Phillips feels it will be harder to achieve this sense of ease and vulnerability now, she believes that students have enough emotional and physical memory of what’s it like to be close to someone, to use their vibrations to connect to the other which will help them navigate that space.
While LAMDA plans to continue with blended learning in the coming months, Phillips continues to be (is eager, yet) concerned, about (installing) starting vocal work (in) with a new cohort.

While having a common vocabulary and shared experience helped actors proceed with their learning on Zoom, it is a daunting task to communicate vocal knowledge with a new student who has no idea of voice work and has never had a hands-on experience. As Phillips put it, would it be like leaving a child with a chainsaw in the name of self-learning?
As a starting point, Phillips feels the need to approach the work “slowly”. “So I think finding your spine, finding your feet, finding your body takes so long in the work anyway. And then factoring in release, breath, being able to allow the air in an easy way without working the air coming in will take time to help new students develop the language of proprioception,” she says, adding that voice trainers must now take more time with preparation and technology to film how something looks effectively, especially when sharing anatomical knowledge about voice, breath and the spine. What can further help is giving them visual imagery to help them understand what their bodies must look like, how their breath must flow. Another way to engage students could be to get the student to know their spine, by marking it against a wall as they come up, like a body map.

Pedagogy in the online medium has taken an interesting turn, where the teacher has to step away more from the pedagogy and let the student make their own journey of learning and self-discovery within it. “I think that’s really, really interesting. And trying to work out what one’s creative role is as a teacher, is fascinating: Are you curating? Are you feeding back?” ponders Phillips.

While online collaboration is an amazing way of working internationally and is a more environmentally friendly way of working internationally, Phillips realizes the importance of getting on board with it as a voice trainer. “I still don’t think it will ever replace a living, breathing human being but I think it can be really exciting about what you can achieve with these technologies,” she says.
Most importantly, despite all the challenges, Phillips believes that trainers need to remain optimistic for the young people learning and going to learn at drama schools. “I feel I have to also remain optimistic for all to know that the art they need for shared space, that exciting live air to send great words out into someone else’s ear won’t go away. And I think we’ll find a way through,” she says assertively.