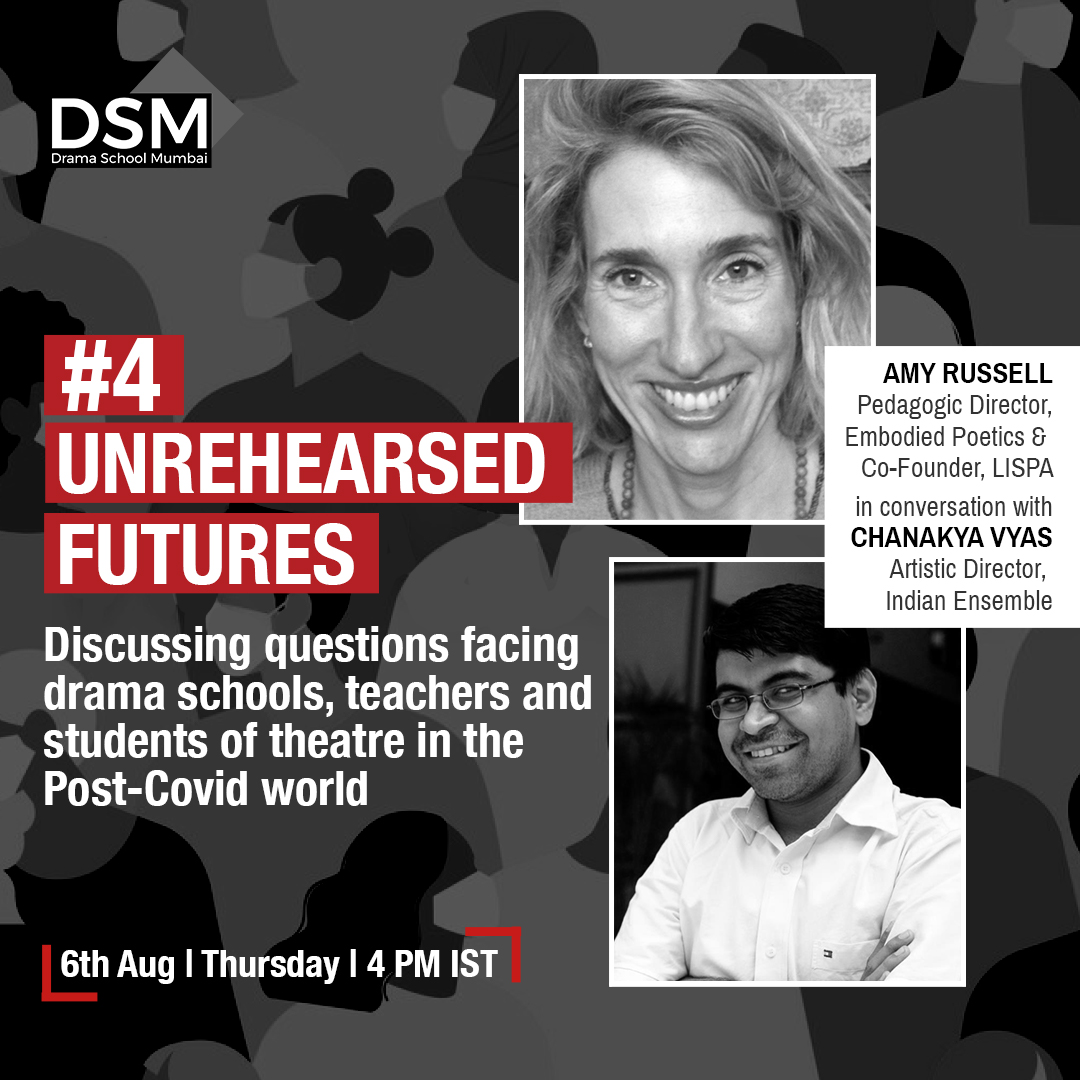 It is going to be nearly six months since the World Health Organisation declared the COVID-19 outbreak as a pandemic on 11 March, 2020. In the weeks following the announcement, several countries went into lockdown, with businesses and schools shutting their doors. Many lost their jobs. With the ability to congregate in a physical space taken away, the site of the workplace shifted online. Work from home Zoom calls became the new norm.

With theatres shut, a crucial element of stage craft was taken away from theatre practitioners and pedagogues all over the world. How do we recreate the feeling of a shared space online? How does this affect the way we think about theatre training? What happens to the embodied nature of actor training in a virtual space? Is performing plays online “theatre”?

In her 2011 book Social Works: Performing Art, Supporting Publics, author Shannon Jackson wrote: “To ask about the role of theater in a world changed by new technologies is to ask about the role of a form distinguished by the co-present state of its participants, one where sender and receiver age together. To ask about its role is also to consider the labour required to sustain a space of shared durationality.”

Amy Russell, founder of Embodied Poetics and co-founder of LISPA, drew focus at a recent Unrehearsed Futures talk to this definition of the theatrical medium: “spaces of shared durationality”. “Is this how we might distinguish what we do in a studio with what we do online?”

As theatre-makers and teachers sit locked in at home for months, they have begun teaching and performing online, which would have been called ridiculous in pre-COVID times. Russell’s concern with the alacrity, if not enthusiasm, with which theatre pedagogues are embracing online teaching is the degree to which they may be responding to panic, to the detriment of the pursuit of difficult questions about the art form. The labour required to sustain a durational commitment to shared time and space is, as Jackson puts it, uneconomical. “We’ve known this since the advent of mass media. We are simply responding to a temporary, albeit horrific, crisis. Or are we also, perhaps less consciously, responding to deeper market forces that have been pushing us out of spaces of shared durationality for a very long time? If we do not offer some resistance to these forces, is there any chance that our spatio-temporal habitat will survive?” Russell wonders out loud.

While she lauds the many breakthroughs her colleagues have found in theatre pedagogy and performance online, Russell explains why she believes in the power of live, shared space theatre.

She shares a personal anecdote where her mother was admitted to the hospital earlier in the day. Hospitals in Tasmania, Australia, where Russell currently stays, have a strict policy of not allowing visitors, except under certain circumstances, to visit patients due to the pandemic. However, a kind nurse admitted her as an all-night visitor, against the rules of the lockdown.

“I cannot tell you the difference that makes to me that I can be with my mother tonight. And I am reminded of the people who have had to say goodbye to their loved ones on Skype. And I am very sobered by this. I thought about why we do theatre and my answer is, as long as I could not bear to say goodbye to my mother on Skype, I will do live theater,” she asserts.

Physical, embodied learning is a crucial part of theatre training in drama schools across the world. Much of what is done in those classrooms is unspoken; it is a nod, a gesture or a human touch. For Russell, not being able to do that is like children being raised by mechanical arms. “Children can’t be raised by mechanical arms. Babies know the difference,” she says, while adding that one can’t give them an audio track of a heartbeat and an electric blanket and expect them to survive. “They won’t. You can’t raise an infant on Zoom. So that would be another answer, I guess. As long as the human infant knows the difference between the virtual and shared space, I will do live theater.”

Russell shares her experience of teaching a Zoom workshop ‘Rewild Your Living Room!’ with Drama School Mumbai, where the idea was to see what participants could make of their relationship with their living rooms they’ve been cooped up in for a long time. “It’s a writing class, but it’s through embodiment so people can go off into their living room space and discover, what I’m calling, a kind of ecological embodied relationship to all the aspects of their room. And basically create from that. That’s an individual space where embodiment can be experienced,” she says. Though the students had fun doing screen improvisations together, it didn’t seem like it would go very far. “It seemed like it was going to give them more ideas individually and they were going to take that forward rather than actually creating something together.”

With a lot of teaching set to take place online in the coming months, till it is safe to get back into physical spaces together, the question is also about how should pedagogues train ensembles in a virtual space? Is it possible online? Russell feels that while the present time is good for practitioners to work in individual spaces, it important to think about if there is a group body in theatre. Is that one way to distinguish what theatre-makers do in their art form, she asks.

“What is the difference between a crowd and a group? When do we start making a group body?” she wonders. Recalling exercises from the Viewpoints method, she says, “There is an absolutely magical moment when you realize that you are no longer an individual moving in your own self-responsible way. You are part of something bigger. It is moving together. It is organic. It has a life of its own. To me, it’s very magical, actually.”

Russell feels that while there is the opportunity to adapt to the new medium and finds its theatricality, it is also crucial to put pressure on the question of a group body. “There’s something about the language of cyber capitalism’s spatiality: ‘Google hangouts’, ‘Zoom us’, ‘chat rooms’. The truth is I experience this terrible facial fatigue – my neck hurts. At the end of the day, I just feel kind of depleted. It’s so obvious to me that I’m missing something,” she says.

While there is a rush to make the best of the situation and ensure theatre is “alive” at this time, Russell worries if trainers risk giving students a false sense of sufficiency by providing simulacra. “We know we can’t touch each other. We can’t share a meal. I can’t smell what you’re eating. I can’t share a bite with you. So it’s very obvious to the other parts of the body that we’re not in a shared space. But it seems to me we’ve been kind of hoodwinked by the dominance of scopic and acoustic sensation, she says, adding that it is a good opportunity to reassess what drama schools must resist from doing within theatre training instead of going hook, line and sinker into the crisis.

There is also a concern among teachers that if students, especially the new ones, don’t have an embodied experience of theatre and training, will they know to go and look for it later? To this, one of the attendees Nicole Stinton, who teaches theatre at Western Australian Academy of Performing Arts, shared her observations about what happened when students re-convened in the physical space. “Something happened when they walked into a room with somebody else and encountered the energy of other people. People knew they were missing it intellectually, but they didn’t realise how much. So the creative burst and experimentation and risk taking that has happened in the past couple of weeks is phenomenal to witness,” says Stinton. She believes that though theatre will change in some forms from this pandemic, the human instinct to connect will take over rational suppression eventually.

When the pandemic disrupted physical teaching, many of Russell’s colleagues in the Lecoq-based community sent out email manifestos saying they will not be teaching until they can teach in shared space. “They’ve been categorical about it. Now they are monetizing their lives differently. They’ve made that decision to stand by their principles and made a stand that teaching cannot be done differently. It must be done in shared space,” she says, asking if there are other ways to manifest resistance creatively without having to stymie the life of theatre.

To this Russell suggest the use of Viewpoints, a highly adaptable technique. One of the elements of Viewpoints is the kinesthetic relationship i.e. spatial response between people. “Well, isn’t that social distancing?” she posits.

“What if you do an improv with 1.5 metres between everybody in the class in the shared space? We can get back into the classroom and do that safely, you know. And we haven’t even started talking about masks, because masks are masks, aren’t they? That’s very safe. That’s very protective. So I think, for me, it starts with the creative person questioning if we really can’t do anything in shared space,” Russell explains.

In conclusion, she suggests that if one were to insist that theatre is a shared space medium, that it is not Zoom, we might propose some sort of creative resistance to the world, to one’s organization, to one’s own practice of the possible manifestation of theatre right now. “On the one hand, we could reinforce our shared space theatricality, like the Italians getting out on their balconies and singing to each other. This is actually a powerful gesture towards our shared space communities. On the other hand, if we were to insist that theatre doesn’t happen if we are not in a shared space, our online teaching might serve to develop or hold over some individually-based skill sets, and also possibly open doors to new and emerging media. ”

However, for many, resistance in forms of refusal to teach till we can meet in the shared space again is not an economical option. There is the possibility of losing jobs if one decides to do this. Careful not to devalue any form, Russell says that the online medium is great to spark creativity and ignite energy in individuals.

More profoundly and perhaps even more controversially, Russell says it might be the moment for us as practitioners to ask ourselves if we have been ignoring what makes theatre theatrical, which is precisely the medium of shared space/time. Referring to director Ariane Mnoushkine, who disparages what she refers to as  “littérature en costume” (literature in costume), Russell hopes that being deprived of our medium for this critical period of time might inspire a reevaluation of what we care most about in our form of practice, and bring us back to the shared space with renewed purpose and inspiration.