India will complete 75 years of Independence this month. Freedom (or Azadi Ka Amrit Mahotsav, as the Government of India calls it) is the word on the street everywhere you go. We wondered, Iin these times, what does the concept of freedom mean to artists and theatre practitioners. To find out, we interviewed some practitioners to understand their thoughts on this.

For Neel Sengupta, co-founder of Third Space Collective in New Delhi, it is the ability for artists to take risks to create work. “It is very difficult for an artist to be able to take risks. Inherently, there are a lot of obstacles to an artist being able to take risks, and they’re not very pronounced and visible in front of you.,” he says. “We can’t just point out and say this is the reason why I’m not free. Technically speaking, you can say what you want.”

The way the financial model in the theatre is structured doesn’t allow theatre-makers to take that money. Neel gives the example of makers in Delhi, most of whom work other jobs, leaving four-five hours a day for practice and rehearsals. He believes this reduces their chances to take risks because one has less time to do what one wants. “There are a handful of people who get institutional funding and salaries,” says Neel. “So, an artist today has to figure out their own bread and butter. And at the moment, an artist has to figure out their own bread and butter through non artistic forms. There’s a huge curb to that freedom of what artists want to do and how they can use that time to express their ideas.” 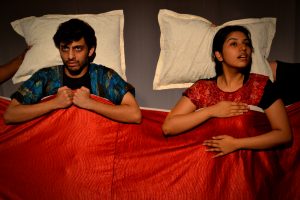 While financial freedom is a major concern for many working in the theatre and performance space, for Deepika Arwind, playwright and founder of The Lost Post Initiative in Bengaluru, freedom is bridging the so-called dichotomy of mind and body that artists constantly deal with. It is also about giving young artists a space to flourish and experiment without any inhibitions. “Freedom to me entails supporting the artists who I work with, financially and emotionally,” she believes. “In my experience, as a young theatre-maker in Bengaluru, I faced immense emotional and psychological trauma while working in certain theatre companies. People heading those theatre companies often would operate from a point of an old-school mindset, which would not be fruitful to the journey of a young theatre-maker. It gave me a setback. Now, in the work that I create, it’s always driven by consensus between all the people involved in the creative process. Theatre spaces should be safe spaces for people, first and foremost,” affirms Deepika.

One parameter that defines how free our society is, is the concept of freedom of speech and expression. But how can one foster freedom of expression, especially for performing arts, when spaces do not exist for artists to mull, process, and create work? The freedom to practice is an essential right of an artist. And often the debate on freedom for artists is generally about the freedom to perform, or rather where to perform. Highlighting the issue of lack of performance arts spaces at subsidized rates in Delhi, Neel laments, “Every discussion we have had with the government and the state is on the right to practice, and that is where there have been a lot of curbs. Even today, the rentals are so high and all the auditoriums are extremely expensive to get into.”

Kamani Auditorium charges Rs 1,10,000 a day, and Shri Ram Centre for Performing Arts in New Delhi charges around Rs 75,000 per day. Most auditoriums in New Delhi charge around Rs 50,000 to Rs 60,000 a day. While spaces in cities like Mumbai or Bengaluru, there are spaces which charge below Rs 10,000 per day. While there is a curation list, if one wants to perform in these cities as a theatre group, it is not impossible. “I can’t do that in Delhi,” shares Neel, “because the costs to rent a space would tower over the sustenance of a show. I cannot rent an auditorium in Delhi to perform. So, we are still within basements, garages, houses, living rooms and occasionally spaces like Black Box Okhla.” 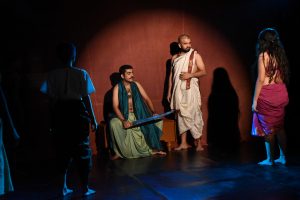 “There is no space for a group to create a performance,” comments Neel. “And if they don’t give us the space to create a performance, the performance will simply not be created. Whether or not you have great things to say, practitioners get tired of the theatre because they feel it’s a fight that they can’t win and there is no support system. The plays that do run in these auditoriums are very expensive. As a consequence, when there is a lot of money involved, people will take fewer risks.”

Nikhil Mehta, founder of Black Box Okhla and director of META award-winning play For The Record, explains how the lack of performing arts spaces in Delhi is a major issue in developing new work and sustaining theatre. He says, “Black Box Okhla came out of a desperate need for space. Traditional venues in Delhi are not only cost prohibitive, but their physical infrastructure is so rigid it discourages experimentation, exploration and discovery.”

“Furthermore, longer runs of shows are imperative, not only to continue developing a show, but also to expand your audience base which is a crucial need for the entire industry. Traditional spaces restrict performances to one-night-only or weekend-only runs —this has been a major roadblock to growing the theatre industry,” he feels.

Speaking about the paucity of new writing for the theatre, Nikhil also mentions, “Stories are at the heart of what we do, and we need strong institutional support for new writing. Though the classical canon will always resonate with theatre makers and audiences, to truly explore ‘modern Indian theatre’, we need a lot of new writing for the stage.”

Deepika Arwind’s i am not here deals with the systematic erasure and exclusion of women writers. She mentions the lack of opportunities for women’s writers, and how that in itself is a form of lack of freedom. “Freedom, as a concept for women writers, would only exist if there was a space for women writers to exist. Since the space itself didn’t exist, how would actual writing come into fruition?” she asks. i am not here spotlights the opportunities that male counterparts are provided with in comparison to women artists through various caricatures in devised scenes, which hauntingly resemble the custodians of art spaces that we see today. 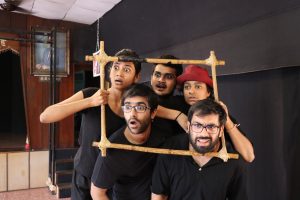 Shreya Agarwal is a young director and performer, based out of New Delhi, who is a recipient of the Refunction grant by Goethe Institut.  As part of the project, she will be collating and documenting the dreams of individuals experiencing the current socio-political fabric of India. When asked what one theatre practice or notion we need to be definitely be free from, she mentions, “The concept of relevance. ‘How current or relevant is this idea’, is the thought that burdens young artists way too much. It asks the artist to already know the answer before starting, thus obliterating the discovery which happens in the process of making theatre. One should make theatre to know, not just to articulate what we know.”

To reach the unreached and not speak in an echo chamber is an artist’s vision. This spurs dialogue and discussion within the broader society. Neel points out, “The experience of a theatre-goer to enter a performance arts space today has become very restrictive and intense because audiences sometimes lack information to know where theatre shows are happening. We need to step up and reach a stage where we are performing at locations and areas which are accessible to the common public; spaces where people may not necessarily agree with our point of view. I think that is essential to the freedom of an artist to be able to bridge the gap and go to audiences who might not agree with them.”

Curated Conversations: Nisha Abdulla, Rumi Harish, Krupa on the non-definitions of the body Unrehearsed Futures (S3) #11 The Burdens of Witness: writing (by) women in times of crisis