Editor’s Note: India has a rich history in theatre, but our knowledge about the work our contemporaries and older groups have and are doing, is often limited to urban centres or the geographies we live in. Driven by a curiosity to know about the work being created across the country, for the next couple of months, we will publish interviews and stories with different theatre groups and personalities from around the country. 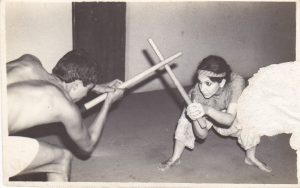 As we take a look at theatre groups that have been around for a long time in India, we are curious about what they leave behind, and who leaves it behind.

This week we take a trip down south to a 40-year old theatre community, Adishakti, created by one of the pioneers in contemporary and experimental theatre in India, the late Veenapani Chawla. Veenapani conceptualised Adishakti as a research and theatre laboratory, and ran it for nearly 33 years before her passing in 2014. After her demise, her students Vinay Kumar (artistic director) and Nimmy Raphael (managing trustee) took time to regroup and reorient themselves on a new path. Each year, they celebrate the Remembering Veenapani Festival in her memory. In a freewheeling chat with Vinay, we probe into questions about Adishakti’s legacy, whose legacy it is and how it has evolved over recent years.

There is a tremendous amount of insight that the work has offered to theatre makers, young and old, over the years. It would be unfair to compress all that they have offered in the questions that follow but hopefully this article will enthuse you, as much as it has the writer, to visit this space and learn for yourself.

Until the visit, we pick Vinay’s brains for some questions that piqued our curiosity.

What was the initial idea behind setting up Adishakti?

Adishakti, as an idea, is an ongoing idea. Veenapani started, like all other artists, with a Eurocentric mindset and pre-written scripts. It was during this period that she realised there was a need to find her own cultural identity in her work. The cultural identity wasn’t just about someone born in 1947, a displaced Punjabi and anglicised education but about social relevance to the times that surround someone. It was a confusing realm to be in.  This is where she wanted to create a sense of inclusivity or hyper inclusivity, where the entity that she created would resonate with people across the country. She started putting her thoughts into efforts and conceptualising the idea of an artist community. By no means was she the only person trying to do that at the time. Several people were trying to create a community where artists could bring in their own diversities and add to the mix but she really wanted to focus on a space where one can do that rather than just having an identity as a community. Something that she was quite certain about was the rejection of either extremes of ideologies. She wanted to ground herself in exploring more and the rejection became the keyword of the identity of Adishakti.

Everyone has this utopian idea of creating an artist community but for Veenapani it was about interacting with each other and creating a centre for intrinsically Indian processes to inspire the next wave of young artists. This wasn’t the only motivation to move to Pondicherry. The move was propelled by our need to create a conducive atmosphere for dialogue and, the main word highlighted, was the space. I worked with Veenapani in Mumbai in several spaces and the need for a space of our own where artists could sleep and rehearse was never clearer.

In the early stages, the conversations were quite thorough and focused towards having that campus, because at the end of the day, if an artist had the safety net of a platform to rehearse in, stay at and converse about; everything else was negotiable. The safety net of having the space also meant there would be no threat of dissolution. A sense of permanence could be felt in the soul of the space.

How do you prepare the youngsters at Adishakti?

The idea of the space is sacred but like any other established structure we had to find and create layers of leadership. Currently, the third generation of leadership is under training, and we’ve figured out a way to infuse the essence of the work we do into each layer and wave of leadership. We have an internal understanding that nobody would run as the leader for more than 5 years and in the period of five, younger members would be given training to lead chapters in 30 percent capacity; this would see a gradual increase over the years until it was their turn to take over!

Where do you see yourself in 5 years?

I don’t think that is a question one should ask any theatre person. That idea is a very business centric idea and question which is heavily reliant on resources. I don’t think any theatre centric space can confidently boast of as many resources to chart out the next five years. Contemporaries of Adishakti and I, in our conversations, have never been able to successfully plan more than the next 6 months of working. We hope things will change and become better.

With everything you’ve found with Veenapani’s vision, how have you been able to add to it given changes in all levels?

I think one of the biggest factors that will help you understand the spirit of our space is the word ‘collaborators’. She never addressed us as students, employees, or anything else. It was always ‘collaborators’. This instilled in us a sense of ownership and intimate relationship to the work we continue to do. I think one of the most challenging obstacles of the blessing of having tall personalities like Veenapani, is that one tends to swim around them. These have been open conversations we have had even when she was with us. The risk of having people drop their own ideas because of what is already taking place, is high. Hence, we pushed ourselves and each other to keep one foot here and another in our travels and explorations. For example, I have been able to explore my own personal research for 8 years now. These conversations and explorations have helped us create divergently different statements of exploration rather than continually compliment the lone ideology that inspired us in the first place.

What would you say was your biggest take away from the conversations?

We were constantly pushed to understand the importance of research, and furthermore, not to see the creation of something very new as a result. Even a resulting experiment is a successful step forward. For instance, we can take existing philosophies, ideas like Meyerhold, Stanislavski and Brecht, study them as if it was all that matters and then try to inject our own beliefs with aspects of the philosophies that resonated with us and hopefully create an experiment/production that takes the thoughts and brings it to the live medium.

How did Pondicherry qualify as the city that was selected to host the campus? Adishakti was conceptualised in Bombay and we’re all amazed by the balance the space has achieved with its urban presence yet the easily accessible escape into nature. Was that the reason, the geographical positioning of the city?

There are two large reasons as to why we selected Pondicherry. Firstly, Veenapani’s devotion to Shri Aurobindo Ghosh and the ashram. Her spiritual mentor influenced her greatly from the age of 6. She always knew that some point in her life she would find herself back at Pondicherry executing her dreams. She created a play called Savithri that tried to capture her learnings from the principles of Aurobindo Ghosh.

Secondly, it is the atmosphere of the city. The city has had a no-nonsense attitude towards pretty much everything. The people here do not intrude into the personal spaces of their neighbours and at the same time exude enthusiasm when there is something that is being showcased. The balance is very inviting for artists like you and I. It proved to be a brilliant stomping ground to develop our new ideas in the theatre.

‘Providing artists with freedom of thought and space for expression’ could be established as one of Adishakti’s founding principles? That is what I’ve understood. Would you believe that to be appropriate?

See, the world is shifting towards the polarities that exist and unfortunately the polarities keep stretching. It is very difficult to create a middle ground for people to come with conflicting ideas and engage in a dialogue. We are not saying that we have the ideal situation but we are definitely trying, rather struggling, to popularise the concept of a melting pot of extremes. We want to engage with people with vastly differing ideas and see how we, on our own, can evolve from the interactions and the possibility for new strains of processes. Finding more patches like ourselves would be the best possible realisation of this dream we are trying to actualise.

In your experience of being influenced by the folks and epics, what did you decipher as noteworthy learnings?

Let’s just appreciate the weight with which the classical work is portrayed. I could have the most well done contemporary physical movement underway but I’ll stand and stare at the person doing the classical next to me. We have to acknowledge the 300-400 year heritage value that is linked with these practices. I’m not saying one should jump around the stage and grab attention but understand the mechanics of the actor, ensemble and space. Let’s assume a piece of work that I want to create, unfortunately the only way some pieces of art have survived have been due to the ritualistic practices that more often than not have Hindutva influence, which isn’t necessarily a bad thing but it makes us avoid the deep scientific research/experimentation that has gone into the work. Carrying forward with my assumption, my biggest noteworthy discovery is to create a version of this piece of classical work. The objective should not be to copy and paste a segment but to be inspired by and create a flow that has relevance to the now and highlights the science of the then.

Anything else you would like for our readers to focus on with regard to the epics?

I would like for them to take a moment to admire the nuanced and methodical approach that the writers took towards the concepts of righteousness and moral uprightness. In the times we live in today, there is large-scale disregard towards these concepts. We often stray away from the truth. We are not doing anything starkly different from what was discussed in the epics when one really observes the themes that were discussed. My advice should not be misconstrued to only perform the epics but it is to read more texts with an open and absorbing mind. Allow them to influence you as they will only make your own beliefs more concrete even if it were slightly altered.

Amplifying The Queer Voice: Lessons from Queer People in the Performing Arts Industry Unrehearsed Futures (S3) #9 From This Place to That Place: Re-directions of creative energy

The Actor’s Resource: 4 Tips to Help Actors Put Life Into Their Lines

Amplifying The Queer Voice: Lessons from Queer People in the Performing Arts Industry