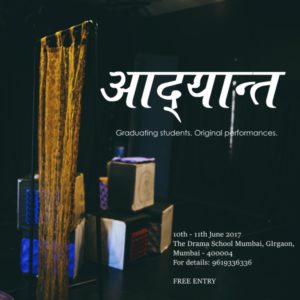 Aadyant is the annual showcase of the DSM’s graduating batch, where the students conceptualise 15 minute performances, write them, direct them, act in them. The conceptualising student has to helm an important responsibility in that performance, that is the condition. Everyone else can then take over other responsibilities related to the performance.
This year, we had five performances, written by Adarsh Gourav, Shruti Sunder, Khushbu Baid, Chrisann Pereira and Komal Khanna.
Aadyant was held on the 10th June and a repeat, second show on the 11th June. Both days, much to the delight of the students, the place was jampacked.
Up first was Shruti Sunder’s piece, The Skeleton Woman, performed by Komal Khanna, Vidyut V and Abhishek Chauhan. The magic realism like theme of it, with a presentation done beautifully, made it a delight. It flowed and took the audience to places. Dealing with the concept of death and coming back to life, the piece kept the audience waiting for more.
Next was Komal Khanna’s Finding Meera, performed by Shruti Sunder, Vidyut V and Deepmala Khera. The mystery thriller about Meera being nowhere to be found, and her roommate (Shruti Sunder) approaching a private detective (Vidyut V) to find her ends in a way one would not expect. The mystery held the audience in their seats and the revelation had their jaws drop.
Then came Khushbu Baid’s State v/s Thapa, a funny take on the judiciary of our country through the case of a Nepali security guard who has killed what is said to be a ghost. The satire was brilliantly portrayed by all the actors, Abhishek Chauhan, Adarsh Gourav, Deepmala Khera and Khushbu Baid. Abhishek and Khushbu played multiple characters and nailed it. The piece left the audience laughing and clapping for the most part. It was also a good relief for the audience after watching two intense pieces prior to this.
Chrisann Pereira’s The Platform was the fourth performance that evening. Four performers, Abhishek Chauhan, Khushbu Baid, Shruti Sunder and Komal Khanna were confined in a space of 8ft x 4ft, and they performed a movement oriented piece about oppression. The four performers portrayed various kinds of oppression, from the oppression of thought to the oppression of action.
The last performance was Aadarsh Gourav’s Ayyo Raju. Performed solo by VIdyut V, the piece was about an old man, who is left alone at home with the family’s pet dog, Raju, while his family have gone on a vacation. The man, at first, is not too caring about the dog, but after his son promises him a Tata Sky connection on return as a thank you for taking care of Raju. This comes when Raju has escaped his leash and ran away. The rest of the performance is about how he manages to leash the dog again.
Aadyant’s raging success as an event this year has made everyone at the DSM very proud. With the 2016-2017 batch now graduated, the school is ready for the next batch which will start their course in July. And Aadyant will return with the new batch, next year.

The Drama School Mumbai Gets A New Logo!

The Guru-Shishya Parampara with Sunil Shanbag and Sapan Saran